Author of Mysteries with Humor, Mayhem, and Murder 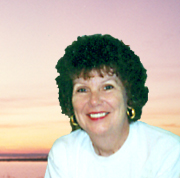 Margaret Tessler began writing stories when she was in second grade and (according to her mother) wrote an imaginative tale about the family cat going to a honky tonk. She's been writing about off-the-wall characters ever since.

Born in Houston, Margaret lived "all across Texas" for nearly 25 years. She attended UTEP (back when it was Texas Western College), then taught third grade at Burleson School in El Paso before "retiring" to become a stay-at-home mom.

She and her family moved to Albuquerque in 1961. In the late 70s, she enrolled in a creative writing class at the University of New Mexico. When the class ended, she and several other women formed a writing workshop that is still active today.

Encouraged by members of her workshop who enjoyed her offbeat view of life (and by winning awards for short stories), she decided to try her hand at writing humorous mysteries. All her stories are set in her favorite towns. Her first, Tangled Webs, takes place in Zapata, Texas; the sequel, Class Disunion, in San Antonio.

Not to be left out, New Mexico features in the third mystery in the series. Black Widow; White Lies, due out in 2007, is set in Chama.

In addition to writing, Margaret likes to spend time with her extended family, which includes eight children and several grandchildren.

She also enjoys traveling. Former "full-timers," she and her husband, Howard, spent eight years exploring the USA in a 30-foot RV before settling down in Albuquerque again.