Murder in the Ozarks 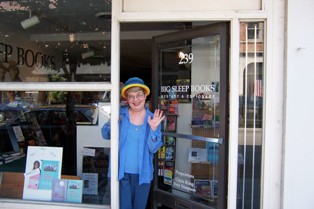 “I can’t think of a thing I’d rather be doing.”

That’s what Arkansas author Radine Trees Nehring says about her writing career. Nehring’s feature articles and essays about the Ozarks, its people, places, and events, have appeared in magazines and newspapers for a number of years, and for ten years she covered Northwest Arkansas as a broadcast journalist.  Her first book about the Ozarks, the non-fiction “DEAR EARTH, A Love Letter from Spring Hollow,” was published by Brett Books, Inc. in 1995, and has been re-issued by her mystery publisher, St Kitts Press.

Radine’s award-winning Arkansas mystery series from St Kitts, “Something to Die For,” began with Macavity Award nominee, A VALLEY TO DIE FOR, in 2002, and was followed by a second Carrie McCrite-Henry King adventure, MUSIC TO DIE FOR, set at Ozark Folk Center State Park, Mountain View, Arkansas.  A TREASURE TO DIE FOR takes Carrie and Henry to an Elderhostel in Hot Springs National Park, Arkansas.  (This novel is also available in large print from Center Point.)  During each of the novels Carrie and Henry’s friendship grows deeper, and the result is A WEDDING TO DIE FOR, which invites readers to a wedding that almost doesn’t happen at the historic (and haunted) Crescent Hotel in Eureka Springs, Arkansas.

Radine’s Arkansas settings are real places and the action can be followed at the locations themselves or on maps provided where the story takes place. (This has made her into a recognized ambassador for the state.)

In addition to the mystery novels, two short stories featuring Carrie and Henry are now available as part of the anthologies, “Mysteries of the Ozarks, Vols. I and II” edited by Ellen Gray Massey for Skyward Publishing.

Why are traditional mysteries like the “Something To Die For” series so popular today?  (They’ve recently passed Romance as the best-selling genre.)  “Perhaps,” Radine says, “it’s because--though terrible things happen and people die--evil is punished and good triumphs in the end.  In today’s troubled world, readers often want that kind of experience.”

The major characters in the “To Die For” series, widow Carrie McCrite and her best friend, Henry King, a retired Kansas City police major, are ordinary people with a fairly ordinary interest, helping people in trouble.  In their case though, (and since this is, after all, a mystery series) that trouble always involves murder.

Radine’s Ozarks tales have won the “Governor’s Award for Best Writing about the State of Arkansas” and the Dan Saults award for Ozarks value writing, in addition to a long list of other honors.  The Kansas Writers Club recently named one of their mystery writing awards “The Radine Trees Nehring Prize.”

Radine is an active member of Sisters in Crime, Mystery Readers International, Authors Guild, and is on the board of Mystery Writers of America, Southwest Chapter.